The Diamond is made up of crystallized carbon generally in: octahedron, rhombododecahedron, cube and in combination with other forms. It is colorless, transparent, translucent and opaque.

It has a high refractive index, the highest of all known precious stones and it is this property that gives it greater value and makes it recognized from other colorless minerals.

Diamond is the hardest mineral of all known natural substances and on the Mohs scale its hardness corresponds to 10. However, we must not confuse hardness with fragility, which is quite another thing; a small blow is enough for it to splinter, which is very common especially on brilliant-cut diamonds, which splinter simply by falling to the ground or striking a hard surface.

The “4C” of the diamond – the classification criteria

Before purchasing such a precious asset, we need precise and universal quality standards. Nowadays the most used and accepted system at an international level is the classification system of the G.I.A. – Gemological Institute of America, which is based on the analysis of the “4Cs”

The unit of weight measurement for diamonds and precious stones in general is the Metric Carat which is equivalent to 0.200 grams.

But not even such a small unit is accurate enough for something so precious. Even in relatively inexpensive diamonds, fractions of a carat are equivalent to differences of hundreds of euros, which is why in the diamond industry the weight of gems is measured up to one thousandth of a carat and then rounded up to the hundreds, commercially called “point”.

Example: a 0.75 carat gem will be commercially described as “a 75 points” The term carat derives from the Arabic “qirat” or carob seed which was used in antiquity as a unit of measurement, thanks to the constant shape and weight of its seeds.

The price of the diamond, which is expressed per carat, never increases mathematically in relation to its weight. So a two-carat diamond does not cost twice as much as a one-carat stone of the same quality but much more. We must not confuse the carat for measuring the weight of gems with the “karat gold title”. The “carat title” indicates the purity of the gold, for example: Pure gold is described at 24 Kt (carat), while the description 18 Kt (eighteen carat) means that there are 18 parts of gold and 6 parts in the alloy of other metals.

Truly “pure” diamonds are extremely rare in nature. The term clarity in this case has nothing to do with the chemical composition of the diamond, but refers to those minute imperfections inside the diamond that can diminish its transparency and therefore also its attractiveness. The Gemological Institute of America, the highest authority in the field of certification, has established an internationally accepted Classification of Purity (to be performed at 10x magnification).

The Diamond is the only gem in which the absence of color determines its value.

The diamond usually appears to our eyes as colorless, but there are very few truly colorless diamonds on the market, since almost all of them have, in imperceptible variations in intensity, a usually yellowish shade. Given the imperceptibility of the distinctions between the various degrees of color within the commercial range, and the price difference between one category and another, this third “C” is perhaps the most difficult to determine, therefore it needs to be sophisticated equipment and a high level of professionalism. So the more the diamond is colorless, the more its value increases. The GIA has perfected a COLOR SCALE in the Diamond by dividing it into the letters of the alphabet, starting however from the letter D.

The cut can be described as man’s contribution to the beauty of a diamond.

It affects the other quality standards that we have seen so far, for example, enhancing the color or hiding some inclusions. The professionalism and talent of the cutter must be measured with a very important compromise: optimal brilliance of the cut diamond and maximum weight retention from the rough.

The main types of cuts are:

Briolette: 90.38ct diamond, a gem that would have been purchased in Asia Minor by Eleonora of Aquitaine in 1145. It reappeared centuries later at the famous jeweler Cartier and later by Harry Winston who set it in a necklace of 157 diamonds that was given to the wife of a Canadian financier. It should now be in Europe.

Cullinan: it is the largest diamond ever found. Its weight was 3106ct. The rough stone was cut in 1908 in Amsterdam and it took 8 months. They obtained the Cullinan I, drop-shaped and weighing 530.20ct, and the Cullinan II, cushion cut and weighing 317.40ct. Other diamonds of considerable but lower carat weight were obtained. All these diamonds were set in the British scepter, the imperial crown and the crown of the Queen of England.

Hope: Very rare velvety deep blue diamond weighing 44.52ct. Famous for the reputation of bringing disgrace to its owners. Among the owners we remember Louis XVI and Marie Antoinette. Now it can be admired at the Smithsonian Institution in Washington. 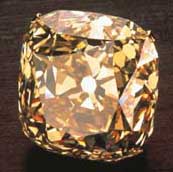 Tiffany: cushion-cut, yellow-gold diamond weighing 128.51ct. The name was given by the jeweler Charles Lewis Tiffany of New York. It was set in a necklace along with other colorless diamonds. In 1983 it was estimated at $ 12 million.

You can find out more about which cookies we are using or switch them off in settings.

Write us on WhatsApp

This website uses cookies so that we can provide you with the best user experience possible. Cookie information is stored in your browser and performs functions such as recognising you when you return to our website and helping our team to understand which sections of the website you find most interesting and useful.

Strictly Necessary Cookie should be enabled at all times so that we can save your preferences for cookie settings.

If you disable this cookie, we will not be able to save your preferences. This means that every time you visit this website you will need to enable or disable cookies again.

This website uses Google Analytics to collect anonymous information such as the number of visitors to the site, and the most popular pages.

Please enable Strictly Necessary Cookies first so that we can save your preferences!

Please enable Strictly Necessary Cookies first so that we can save your preferences!